This appeared in the 2018 Garden Party program. 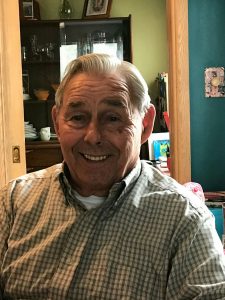 William King’s service to his community extends back to his service to our country as a U.S. Army soldier in Korea. Raised in West Valley, he returned from military service and began a long career as an IBEW electrician—now a 58-year member. He started with Dobkin and Gold Co. in 1960 and after four years as an apprentice, went on to spend 29 years on construction and renovation projects throughout Western New York. From there, he was an electrical inspector for the New York Board of Fire Underwriters for Erie and Cattaraugus Counties for 10 years.

His involvement with Bertrand Chaffee Hospital can only be described as extensive and fundamental.  He joined the hospital’s board of directors in 1972, the same year he was elected as president of the West Valley Volunteer Hose Company. Between then and 1992, he was an integral part of expansion and construction projects for the facility.  His call to service did not end there, as he became the town supervisor for Ashford in 1992, continuing for several terms, and he has been the town’s budget officer for 28 years and counting.

In 1997, he came back into the Bertrand Chaffee fold as a member of the then-new BCH Foundation, where he has remained a strong presence for the past 21 years, now as president. During his tenure on the board and foundation board, he served as president for the majority of his terms.

He and his wife, Carol, divide their time between West Valley and a home in Florida.

We thank Bill for his unwavering support of our hospital, his belief in our mission and his commitment to making our community a better place.