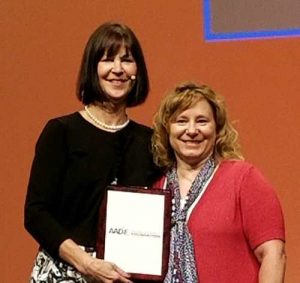 Springville resident Kathleen Hebdon, RN received one of two “Rising Star” Awards from the American Association of Diabetes Educators (AADE) at its August meeting. She was recognized as a diabetes educator who has demonstrated leadership and commitment in her practice.

Hebdon leads the diabetes education efforts at Bertrand Chaffee Hospital, which has a program that is accredited by the AADE. She became a certified diabetes educator, and established an AADE chapter in Buffalo, the fourth chapter in New York State and the only one west of Albany. Hebdon was also named a president-elect of the New York State AADE board of directors. Her four-year term will begin in 2018.

There are more than 800 diabetes educators in the NYS AADE organization. The mission of AADE is to empower diabetes educators to expand the horizons of innovative education, management and support to provide optimal health and quality of life for persons with, affected by or at risk for diabetes and chronic conditions.